In every retrospective exhibition of a contemporary artist still living which I have visited, there has come a point where suddenly the art stops being about making good art, and becomes merely a symptom of fame, money and success. This is interesting in itself, but invariably disappointing, and certainly what I felt when visiting the new Marlene Dumas exhibition at Tate Modern last weekend. (I also experienced this at the generally excellent Anselm Kiefer retrospective at the RA, but as he started encrusting his works with diamonds, and I can’t resist sparkles, I forgave him). 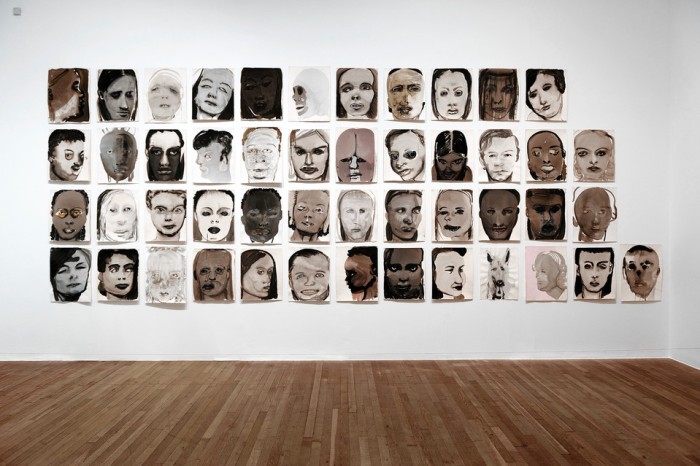 However, there is certainly more to celebrate than bemoan here. One of the first works the visitor is confronted – and I use that word deliberately because most of Dumas’ portrait are extraordinarily confrontational – with is her 1994 Work Rejects. A grid of faces which start penetratingly out at the viewer sometimes through several layers of ripped paper, whilst other pairs of eyes roll back into heads as though the owner was having a seizure, this work is unsettling to say the least.

Pretty quickly we are introduced to Dumas’ statement that “I deal with second-hand images and first-hand experiences”, and it is testament to her skill as an artist that she essentially reproduces “found” images (very few of her portraits are from life), and through her artistic process imbues them with new meanings and perspectives. A prime example of this, and possibly one of the most powerful works in the exhibition is her 1991 Black Drawings. 111 india ink face portraits from found photos of unknown black people. Whilst she herself claimed that this work was an exploration of black as a colour and a material medium, it is black as a racial differentiator which compels the viewer. Each face is completely individual; Dumas has not homogenised them despite putting them in a racial group together. Her handling of the ink itself is visually appealing; an unoutlined grey oval wash for the face, contrasting with a much thicker black ink to delineate the features. It is this which makes the eyes so hypnotising. Black Drawings was inspired by a 1900s postcard book of photos of various “natives” made by European colonialists. Made as an ethnographic documentation of bodies rather than people, Dumas treats each face as a human, and gives them back their face and some kind of identity. 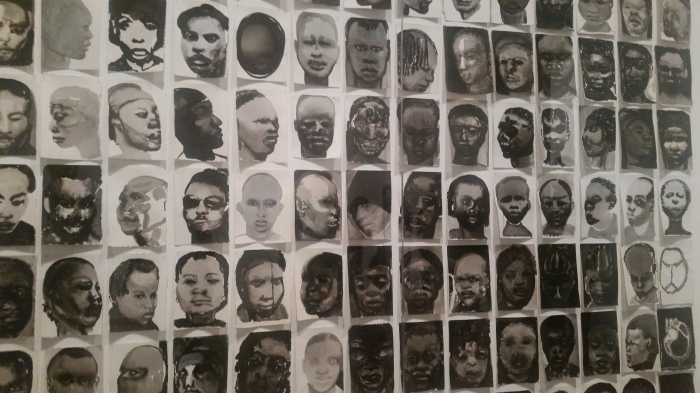 This kind of social commentary is prevalent in Dumas’ work, and nowhere is it stronger than in her paintings of women. She first painted her Magdalena series for the 1995 Venice Biennale: tall narrow canvases in which totemic nude or semi-nude women emerged from flat, dark backgrounds. A work called Great Britain – portraits of Naomi Campbell and Princess Diana side by side – creates a dialogue about class, style, race and femininity; “Glorious Venice”, a fleshy naked woman cupping her breasts and pouting dark red lips harks instantly back to Titian’s plump and sensuous Venuses and Floras, and asks us if perceptions of women have really changed since the mid-16th century. Using diverse sources and models of femininity, Dumas presents a monumental experience of her sex which transcends time and culture. This impression is cleverly augmented by the fragment of Dumas’ writing printed on the wall:

It’s not the fallen woman

nor the temptress I’m after.

It’s not the baby dolls I want

nor the Amazons. It’s everything

mixed together to form 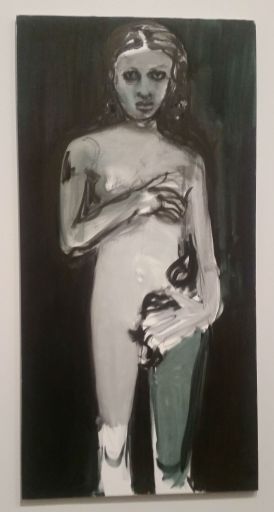 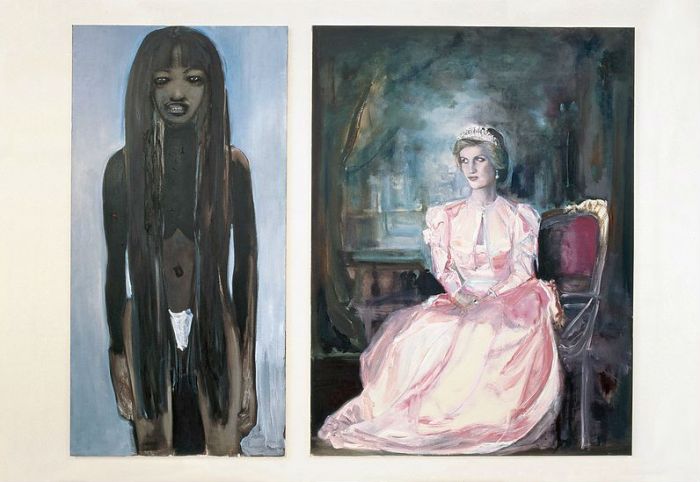 In her pornographic watercolours Dumas further exposes femininity and pares it down to one common shared experience: sex. Using both private and public source material, she utilises the naked body as a metaphor for the artist offering up her work for judgement, but more importantly, she simply offers up the naked body. What I particularly enjoyed about these works was the extraordinary technique with which Dumas models watercolours almost as though they are thicket paints, which gives the bodies an unusual and unexpected corporeality. They are both insubstantial ghost and physical presence. Their powerful rawness is refreshing, and I felt that here, Dumas was really just presenting the human body in its own right, without an obvious political agenda superimposed on it.

So far so good: but let’s return to this notion of the political in Dumas’ work. Thus far we had seen works which were allusive, using famous and unknown faces and bodies subtly, to make bold statements about the socio-political culture which produced them. One of the final rooms in the exhibition was dedicated to works made at the start of the new millennium, when Dumas turned to representations of war. Using images of dead terrorists, people being shot, scenes from the Israel-Palestine conflict, or portraits of Osama Bin Laden, as source material, she reproduced these literal representations of global conflict as paintings. And that’s all they are: reproductions. They are not transformed into anything more meaningful, and looking at them, my companion (a very talented art historian) and I felt a sinking disappointment. We put this down to the disease that seems to strike many artists: success. These paintings are in a style which had proved so effective in works such as the Magdalena’s, thick oil paints in striking or discordant palettes, but it rings hollow here, and I can’t help wondering if that’s because she’s using an old formula, a pastiche of her previous brilliance.

This low point is, in my opnion, typical of a Tate Modern exhibition nowadays: often tour-de-forces in a league of their own when it comes to size, breadth and depth, yet there is an all-consuming appetite for unnecessarily long blockbuster exhibitions which don’t discriminate ruthlessly enough between works that deserve to be there, and works included for the sake of it. They fail to take into account the weary feet/brain/eyes of the visitor, who does not want to spend 2.5 hours in an exhibition and leave feeling like they rushed the second half (or is that just me??). With a few different curatorial choices this exhibition, full of desire, menace, loneliness, humanity and death, could have been perfect. The exhibition ends with Dumas’ series Great Men, ink drawings on paper of celebrated men who suffered for being homosexual: Alan Turing, W.H. Auden, Oscar Wilde. This was motivated by the recent laws passed in Russia making homosexuality illegal, and, at the end of the day, this is what Dumas does best through her paintings: giving back a voice to the social outcast.

What I’ve covered in this review is still only a small portion of the revelatory works on show, and I urge you to go and see it before it ends on 10 May 2015.

Copyright Disclaimer: I do not own any of the images used in this article, all © Marlene Dumas