According to other reviewers, most people will recognise Eric Ravilious’ name from the Wedgewood Alphabet he designed. Before this show at the Dulwich Picture Gallery however, I couldn’t lay claim to ever having heard of him before, which I now know was a crying shame. Upon entering the exhibition I was immediately drawn into the strange, silent world of this underappreciated war artist.

The exhibition was divided thematically, which allowed one to identify patterns in his work but left little room for exploring any trajectory of development in his work; the passage of time itself seemed to be irrelevant in those rooms. Context was a little thin on the ground, and I felt as though I had been plunged straight into his world without having any supporting knowledge of it. Perhaps however, this is the effect of the paintings themselves rather than their environment – if I had to characterise the evocations of his work in the broadest terms, it would be uncanny and nostalgia, two qualities which aren’t necessarily related.

The element of nostalgia is felt instantly upon entering the first gallery: watercolours of old-fashioned vehicles such as an abandoned No. 29 bus, or a group of caravans, are formed out of faint feathery brushstrokes and an autumnal palette of golden yellows and browns that suggests a hazy light of times gone by. The overall effect is of some faded old photograph from the 1930s laden with significance and personal feelings, but this is the first suggestion of deception in Ravilious’ work – for we cannot say if this work was calculated to inspire nostalgia, seeing as he was painting it when it was contemporary. Thus the exhibition sets up a dual purpose – to remind the viewer of their protean role as an interpreter of historic works, as well as a simple spectator.

As we move into his war paintings, there is another emotion resonant in his scenes – nostalgia morphs into an apparent romanticism. In Tiger Moth (1942) we see a lone fighter plane gliding over a ploughed field dissolving into the horizon as shadows lengthen and the sky turns a dirty grey. Two tiny figures are visible in the cockpit of the plane. It is the inclusion of these two miniscule figures, barely more than single brushstrokes, that break the illusion of romanticism. Suddenly we realise that the shadows forebode the inescapable battle, the plane a ghost of itself which forebodes its probable demise. This realisation didn’t hit me until later in the exhibition when I came to Runway Perspective and Hurricanes in Flight, from the same year; without the addition of people, these visions of flight are liberated from the cost of human life and evoke the freewheeling freedom of flight. 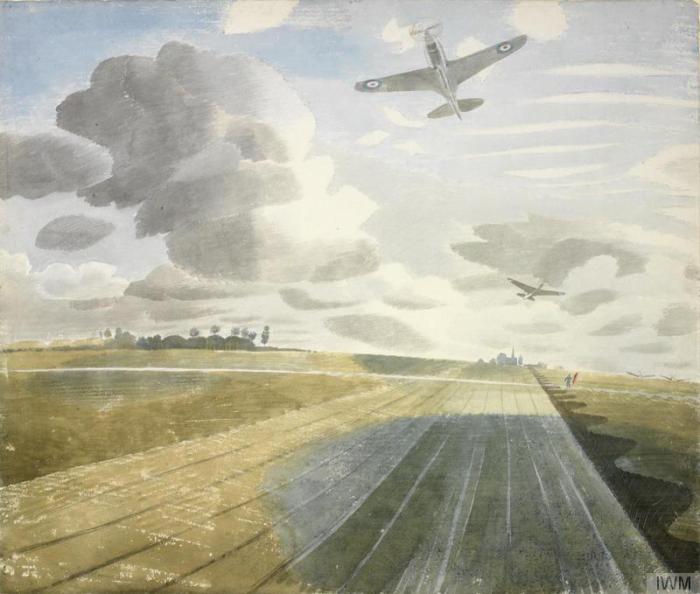 This lack of human figures is in fact one of the defining characteristics of Ravilious’ work – a whole section of the exhibition is dedicated to his watercolours of interiors, quaint cottage rooms, luminously calm greenhouses bursting with cyclamen or tomatoes, or mysterious war rooms with map-papered walls, and most arrestingly, The Teleprinter Room, an abandoned arcane monolith standing dormant in a dusty basement, waiting to be called to duty. This is Ravilious’ true genius, a talent for infusing inanimate objects with uncanny presence. A rather amateur looking pencil portrait of a girl shows how ill at ease he was with the human form when juxtaposed with the drawing next to it of a sunflower, virtuoso in comparison.

A Farmhouse Bedroom, Courtesy of the Trustees of the V&A 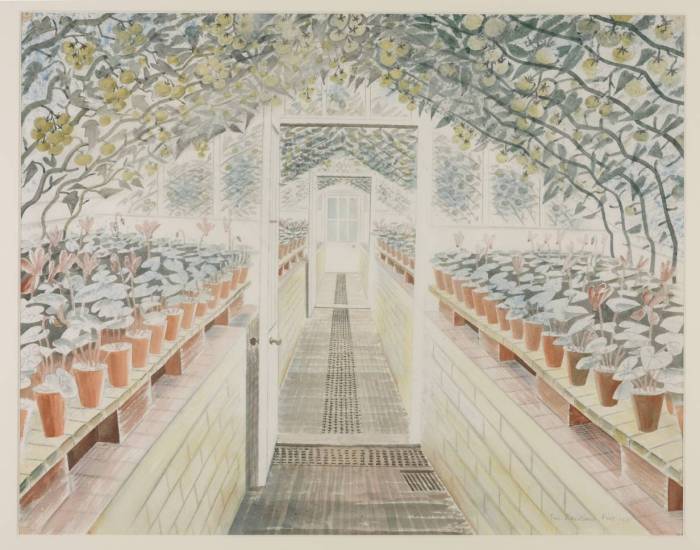 The Greenhouse: Cyclamen and Tomatoes 1935

Similar to the interiors, the landscapes have a subtly distorted perspective, a kind of heaving breathing presence instead of human life forms: in The Westbury Horse the chalk animal dominates and inhabits the landscape like a protective ancient guardian. When people are present, they are insubstantial and overwhelmed, like the solitary figure being subsumed by an undulating rippling path through hedges looked over by looming hills and trees in The Wet Afternoon. These paintings return the 21st century audience, so much more likely to be city-dwellers, to the true nature of the British countryside: wet, wild and windy, awakening our most primitive instincts against danger. Ravilious seemed to favour dirty weather, with barely a blue sky to be seen in the entire exhibition, perhaps because of the uncertain atmosphere it gives every scene, the liminal potential of twilight, dawn and storm. This alternative version of the traditional English pastoral scene is infused with a kind of weird energy, redolent of a country teetering on the precipice of a world war.

Ravilious is on at Dulwich Picture Gallery until August 31st 2015.

Copyright disclaimer: I do not own any of the images in this article.